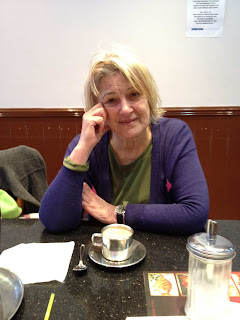 
I arrived a few minutes before the appointed hour at this small, unpretentious eatery tucked away in the middle of busy Tooting High Street. It is a very short walk from Tooting Broadway tube. N arrived shortly afterwards - she had actually gotten here early but had been out perusing Indian groceries in shops further long the high street.

I settled on idli and a masala dosa. N went for a Mysore masala dosa and a mixed uthapam. The idli first - just about ok - soft but not fluffy, in fact a tad undercooked in the sense that there were moist bits inside. N's Mysore masala dosa was frankly a disappointment - cold and soggy. The accompanying sambhar was spicy but average in flavor. I liked the coconut chutney which had a nice chewy texture and fresh taste. N did like the reddish stuffing in her dosa - pureed potatoes and carrots spiced with green chilis, mustard seeds, and urad dal (lentil).

My dosa was better. It was warm and flavorful. N's uthapam was loaded with toppings and was decent. We finished with coffee in cute steel cups. Service was attentive.